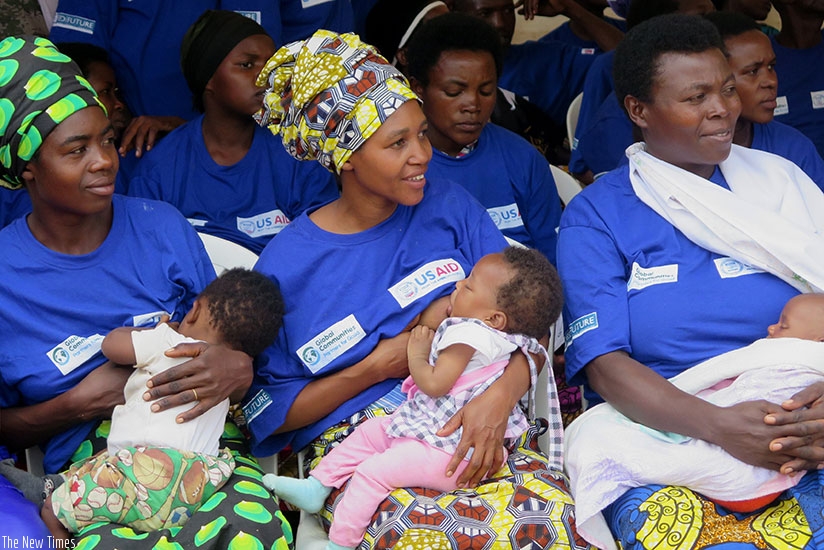 Anatolie Uzayisenga, a teacher at Bisate Primary School in Kinigi Sector, Musanze District, gave birth to a baby boy one year ago.

Six weeks after delivery she had a tough choice to make ; forego 80 per cent of her pay and stay with her newborn baby or return to work.

She opted for the latter. But to balance the two roles, she would bring her child to school, and during breaks rush to check on her child.

“I had to return to work after six weeks. Even though the baby and I were still weak, I had to endure because that was the law. If I exceeded that period I would be penalised or even risk losing my job,” Uzayisenga told The New Times last week.

But the good news is that the law has now been adjusted to the benefit of mothers like Uzayisenga.

Effective November, mothers will not have to make that difficult choice. They can now stay home with their newborn babies for up to 12 weeks without fear of losing their full pay.

According to the Rwanda Social Security Board (RSSB), the new scheme that guarantees full pay for working mothers in now operational.

RSSB is mandated with management and implementation of the maternity leave benefits scheme.

“The news about this scheme is pleasant to our ears. After three months, a child has started getting strength and the mother has been re-energised,” Uzayisenga said.

RSSB says the scheme is a new social security protection mechanism whose establishment is part of the Government’s commitment towards empowering Rwandan women to physically recover and give newborns the best start in life. The scheme also aims at preventing maternity leave from becoming a barrier to women’s contribution to the national development.

Chantal Mukarutabana, the teachers’ representative at Rwanda Education Trade Union, said previously some employers were reluctant to offer jobs to women because they had to stop working when on maternity leave.

Mukarutabana reiterated how the new scheme is essential in the development and health of the child and mother, referring to the 1,000-day campaign spearheaded by the Ministry of Health’s Rwanda Biomedical Centre, which underscores the potential of breastfeeding to the child’s health

Erneste Niragire, the advocacy and communication coordinator at Pro-Femmes Twese Hamwe (PFTH), an umbrella organisation working for the advancement of women, peace and development, welcomed the news of the new scheme coming into force.

“What many mothers have been doing is to ‘sacrifice themselves’ to go to work after first six weeks, instead of getting only 20 per cent of their salary if they opted for the remaining six weeks of leave,” Niragire said. “This situation posed problems to both the child and mother’s health.”

A show of Rwandans’ solidarity

Speaking to The New Times, Dominique Bicamumpaka, the president of the National Congress for Labour and Fraternity (Cotraf), one of Rwanda’s largest labour unions, said the implementation of the new maternity leave benefits scheme is a demonstration of the solidarity that is characteristic of the Rwandan people.

“When a woman gave birth in the past, the community would collect firewood and make fire to keep the ‘maternity ward’ warm for the benefit of the mother and child and would provide her with porridge and food to eat during postnatal period to get enough breast milk.”

Bicamumpaka added : “All that was done in reward for the mother as she had given birth for Rwanda. Indeed, the mother was weak after birth and she needed support.” The labour unions, Bicamumpaka said, will work with RSSB to ensure the successful enforcement of the scheme.

How the scheme works

The eligible beneficiary of this scheme is every employed woman who goes on maternity leave after having contributed to it (the scheme) for at least one month. RSSB as the custodian of the maternity leave benefits insurance will cover six weeks of the paid leave starting from the seventh week while compensations for the first six weeks will be met by the employer.

Monthly contributions to the scheme shall total 0.6 percent of the employee’s gross salary with both the employer and the employee each contributing 0.3 percent.

Contributions shall be made by all (male and female) employees in Rwanda and by every employer (private or public).

According to the provisions of the law, the employer declares and remits collected contribution to the Social Security Administration not later than 15th of every month following the month of contribution.

The director of public relations and communication unit at RSSB, Moses Kazoora, said they will carry out extensive sensitisation to ensure efficient implementation of the scheme.