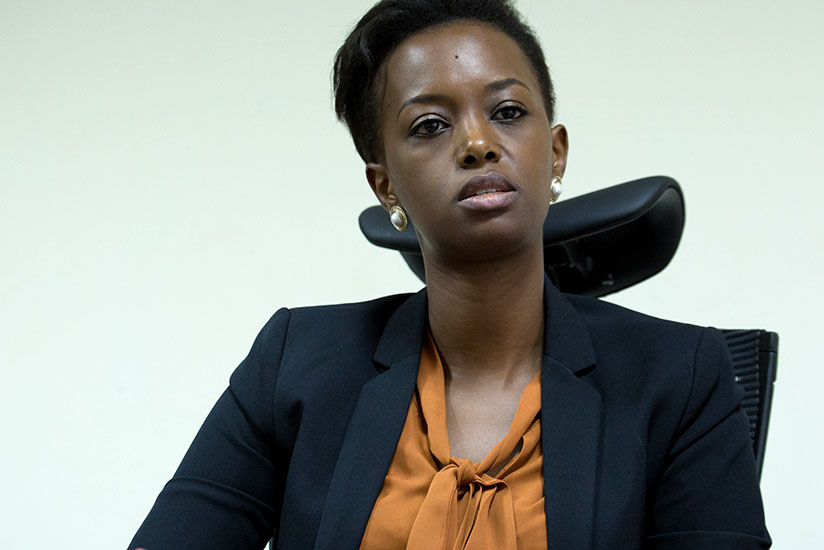 Patience Mutesi, the Country Director for Trademark East Africa (TMEA), says one of the organisation’s goals is to work with various partners like PROFEMMES Twese Hamwe to help women entrepreneurs get access to credit.

The agency which was created to facilitate trade and promote business competitiveness in the region, has funded various projects worth $65 million.

Sunday Times’ Emmanuel Ntirenganya had an interview with Mutesi on a number of issues which include TMEA’s priorities and how to empower women entrepreneurs for them to be competitive in the business sector. Below are the excepts.

As the new TMEA Country Director, what are your priorities ?

My priority will be to ensure that we have a smooth transition between strategy one and strategy two, to make sure that the projects that we started in strategy one are closed well on time, on budget and on good quality. My second strategy is mobilisation to be able to adequately raise funds for strategy two.

Smallholder women traders have been facing challenges of lack of capital to run businesses : how is Trademark East Africa going to help address such issues ?

In cases where some women lack access to capital, we look at institutions we can work with through PROFEMME Twese Hamwe, to have better access to finances. So, I would say that we work with a number of partners to be able to help these women improve their businesses.

For us what we do is enabling the businesses to get to that level where they can access capital, and this includes doing the groundwork for them.

I think a lot of it has to do with cultural barriers. How many women are out there actually looking for money (loans) ? And then, when they are involved in an economic activity, they will go for what is easiest for them to find.

And I think that also, there is a general challenge [of] women being less attracted to loans ; I think women do not like credit as much as men do and that constrains them in terms of how much they can grow their business.

Most women have been engaged in small businesses. How do you support smallholder women traders grow their businesses ?

In all the interventions that we do, gender has to come out strongly. If I can give you an example, The Ministry of Trade, Industry and East African Affairs has a plan to build cross-border markets.

And of course the way she is coming from her home with the baby on the back and they have to leave their children on the border to go and trade on the other side of the border. So, when you look at such a kid, there is no way you can expect this woman to really focus on her business, [as] her mind will be on that child.

But, in our interventions, we realised that we could actually include in that space a crèche – an area where women can have their children taken care of carrying out business activities. So, that is just an example to show how much we consider women traders in our interventions.

In addition, we are working with PROFEMME to be able to reach women traders. Through Profemme Twese Hamwe, TMEA has supported Women in cross border trade by getting businesses formalised into business cooperatives in order to train them and enhance partnerships.

In turn, there has been an increase in revenues for the women in cross border trade and improved implementation of key national and EAC gender responsive trade instruments.

We have trained 3,000 women in cooperatives so far and there is actually an impact on the revenues because [for] the women that we have trained, there has been a reported increase in their incomes. Before they were making Rwf15,000 a day, they are now reporting Rwf55,000 thanks to this training that has been provided to them.

On the issue of competitiveness : It has been revealed that women often do not bid for or win large business contracts such as public tenders because of lack of business capabilities and financial means. How can such a challenge be dealt with ?

I think that will have to be more of education, educating women, improving their capacities ; but a lot of that will take time because I believe that most of that is a cultural barrier. When I say cultural barriers, we think that as a woman, you shouldn’t be wealthier than your husband and if I am wealthier before I get married will I be able to get a husband ?... you know those kinds of cultural barriers which nobody will not necessarily tell you, but that’s the thinking of society. So, we need to be able to change that kind of thinking, to challenge it and to go out and utilise our skills to the maximum potential, which I realise is a common challenge because we don’t really fully utilise our potential.

On the agriculture sector point of view : It has been realised that women make the largest proportion of farming population in Rwanda, yet they do not gain enough from it to develop : What can be done to revitalise women’s farming practices to get more revenue from the sector ?

It is not easy for them to go for agriculture because they have probably small pieces of land, they are unable to grow something and then trade it because that is what is accessible to them at that time.

Through a project aimed at improved Export Capability, we are working with coffee farmers through TWIN – a UK based coffee company - to improve the quality and quantity of coffee exported from Rwanda by providing capacity building for the farmers and linking farmers groups and companies to export markets in Europe and America.

And one of the things that is really exciting that we are looking at is this coffee that is grown by women-only cooperatives and they are able to fetch higher premiums for the coffee because there is that social aspect of women doing the entire chain of coffee from growing it to harvesting it, to processing it, to packaging it and exporting it.

Considering the matter of emphasis : which areas should women focus on to make the most of business opportunities- something that can be considered a niche for women’s businesses ?

The challenge that I see is that women will spend less on value addition. I think that if there is any one area where more effort should be spent on is adding value on the commodities that they are trading to be able to fetch more revenue or higher margins on their goods. And that is a common challenge because most women would deal with agriculture produce.

So, they will buy beans as they are, peas as they are, Irish potatoes as they are, while on the other side, someone else is adding value and earning much bigger margin on their commodities. So, I would say any value-addition activities, is where the money should be invested.

You have been rising in business positions in areas that include banking and now you are TradeMark East Africa Country Director : What is your winning (business) formula or message that other women (and girls including young students and graduates) can do to be successful business practitioners or entrepreneurs ?

I don’t think there is any secret, but what I think is that we need to change our mindsets and follow our hearts. If you feel like doing something differently, you go ahead and do it ; that would be my advice. And we can do anything.

First of all, we have no excuses in Rwanda for us not to get to where we want to be ; we have a country that priorities women empowerment and gender issues.

But I think the challenge for women who are in the workplace, is to be able to be models for younger girls, provide career guidance, advice for young girls. We need models to mentor and coach young people on how they can balance business and home responsibilities.