Our journey to resolve our community conflicts. (A story of Jeanne Nyirakurama)

My name is Jeanne Nyirakurama, I live in Busoro Sector, in Nyanza District. I am married and a mother

of three children. I am a farmer. In the beginning, Every Voice Counts was operating in the Rwara and Kagarama villages of the neighboring Cell. There were two community mobilizers and then after they decided that each representative of women at the cell level should join the Every Voice Counts Program. We joined others for a series of training in the city of Nyanza. We were mainly trained in violence against women and children as well as family conflicts management.

The trainings also raised awareness around the necessity of supporting the neediest community members. But this was not part of the training, it was our own initiative.

As we were being given a transport stipend, we agreed to create a solidarity fund where each of the 30 community mobilizers in this sector would give 1,000Frw and that money would be a source of support to the most vulnerable community members. I decided to be part of this fight for gender equity and community peace because I have been bothered by the cases I noticed in my community : issues faced by rural women that really needed advocacy.

Some of the advocacy activities we have done since I joined the program was to support two families who had marital conflicts or because husbands would come home drunk. In collaboration with the local authorities, we were able to reconcile them. There is also another family living in this neighborhood, they are very poor. 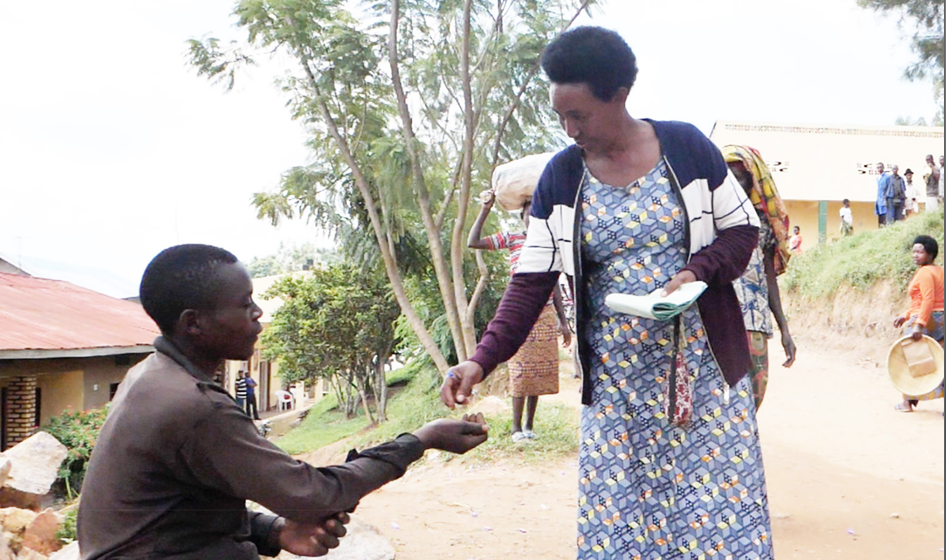 Recently, they had two stillborn babies and the family was very much affected. Since they are my neighbors, I was the one to alert other community mobilizers and advocated for disbursing the funds to support them. We agreed to use the solidarity funds to buy clothes and foodstuff that helped them in those hard moments. Of course, we had to inform the local authorities that our efforts to support each other at the grassroots level are not dormant.

Being part of Every Voice Counts Program brought change in my life and allowed me to support my community. Before I was the women’s representative at the Cell level and I thought that my role was just to wait for people to come to me. Now, that I have been trained by PRO-FEMMES TWESE HAMWE, I got to understand that it was my responsibility to join others where they are in their households instead of waiting for them to reach out.

When I compare the role of a woman in the society in the past and in the current era, I am very happy because every woman in Rwanda knows that her voice counts and is valid. I believe that it is the leadership of our President that gave guidance to this change. He has given us 50% of positions in the decision-making committees and that does not mean that we cannot compete for the remaining half. As a result of that inclusion, at some local authority level, there are some leadership committees or councils composed of 70 or 80% of women.

I have hope that there a profound transformation happening, just because of what Every Voice Counts Program is doing at the community level. A piece of advice I would give to other Rwandan women is that advocacy without actions cannot make any impact. My encouragement to them is to work hard and contribute to the family earnings. It is good that men provide for the households but the efforts of women are also needed to catalyze the economic empowerment of a family. Conflict resolution is not enough. Sometimes you realize these conflicts are rooted in economic issues. When you teach a woman to create some income generating activities especially in agriculture, you are also teaching her how to create a peaceful home for her family.

In this journey, we do not forget the youth, we ensure that we embark them in the meetings, discussions, and decisions that we make. The involvement of the youth provides a platform for us to discuss some of the issues that affect them such as teen pregnancies and drug abuse. Now, Jeanne is a community mobilizer in Every Voice Counts Program and she is as well the women representative in Busoro Sector.