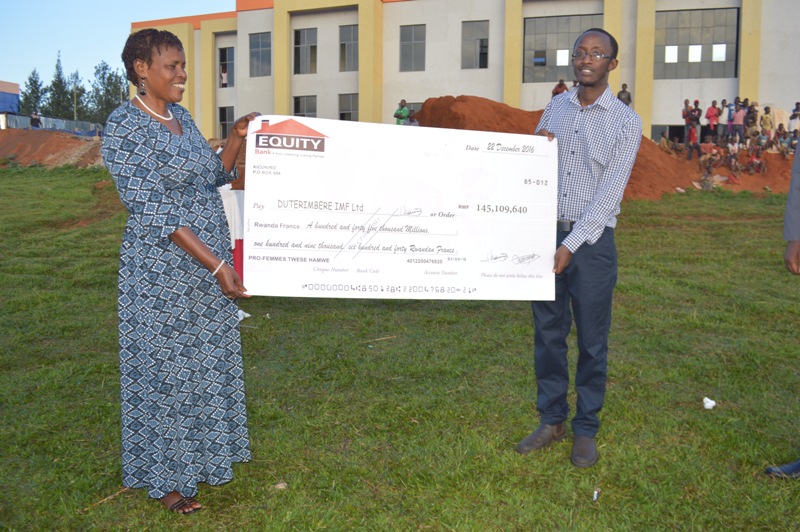 Pro-Femmes/ Twese Hamwe is implementing a project funded by Trademark East Africa since 2012 that aims at “Strengthening the Economic Power of Women in the Informal Cross Border Trade Sector within the Framework of the East African Community Integration”. The goal of the project is to enhance a regional integration that permits women and men of border communities to fight against poverty and contribute to sustainable economic development. The project’s target group is small scale cross border traders that reside at near border, mostly women and its being implemented in 9 distritcs : Bugesera, Nyagatare, Kirehe, Nyaruguru, Gisagara, Burera, Gicumbi, Rubavu and Rusizi. The projects’ activities are based on 4 components include : Capacity Building, Access to Finance, Access to Markets and Advocacy. Under the component of access to Finance, 21 cooperatives have been selected to be funded under the cost sharing fund initiative, whose purpose is to encourage women cross border trades to engage in value addition and do product transformation to enable increased profits from the trade they conduct.

The launch served 2 purposes : 1. Raise awareness publicly about the initiative and its expected impact 2. Increase visibility of the project’s work done since 2012

The launch event was opened by the chairperson if Pro-Femmes/Twese Hamwe, Jeanne D’Arc KANAKUZE and the Programs manager of TMEA, David Butera. They both explained the purpose of the cost sharing Fund, which is to encourage cooperatives to think big and venture into bigger markets beyond borders.

A representative of the women cross border traders, from cooperatives that were selected for the CSF support also gave a speech and expressed appreciation for P/F/TH and TMEA for their continued support. “ We have come from far with pro-femmes and we appreciate thir continued support. This step is so helpful for us and we cant thank them enough”-She said.

A speech by the Managing Director of Duterimbere IMF was also given after a dumming cheque od 145,109,640 Rwanda Francs was handed to him by both PF/TH Chair and TMEA, as funds that will be used in this initiative.

The closing remarks were given by a representative of the ministry of Gender and Family promotion (MIGEPROF), which expressed appreciation for the work PF/TH doe for small women entrepreneurs in cross border trade. For more details, here is the link to a media report

As a way forward, Duterimbere IMF explained that they will be finalizing the purchase and delivery of the machines early 2017 and will continue to follow up with cooperatives to see that their projects are implemented successfully.