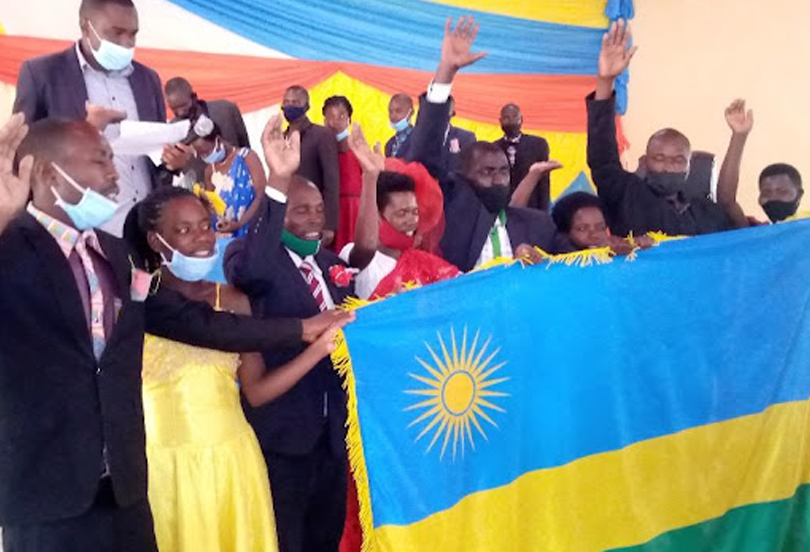 Civil Monogamous marriage for the family’s safety and development

With the aim of strengthening women and girls champions with knowledge, skills, values, and attitudes to boost and drive changes in their localities, advocate for their issues, thus, exercising their voice ; in partnership with CARE International in Rwanda, in January 2022 Pro-Femmes/Twese Hamwe has introduced Gender Equality and Women Empowerment (GEWEPIII) in two new sectors of Kitabi and Uwinkingi in Nyamagabe district, in order to multiply impact in improving women’s voice and participation in decision-making processes.

In this regard, in collaboration with local authorities, 20 women and 20 girls from Kitabi sector were selected and trained in leadership, public speaking, advocacy, collaboration, and networking. They then formed a local network in their sector whereby they meet to discuss issues affecting their lives and find solutions to their community’s emerging challenges. At the end of the training, trained champions developed actions plans, which include activities that contribute to finding solutions to various issues they observe in their communities in which illegal marriage abounds.

In getting prepared to celebrate International Women’s Day (IWD), in collaboration with LA, from 18th February 2022, women champions mobilized illegally married couples and encouraged them to legalize their marriages. This mobilization was conducted by house-to-house visits where couples were taught the importance of legal marriage (equal access of family members to family properties is among the benefits). They encouraged the families to legalize their marriages. As a result of champions’ collective actions, on 8th March 2022, during the celebrations of IWD ; 54 couples : 24 in Kagano cell, 17 in Uwingugu cell, 7 in Mukungu cell, 4 in Shaba cell, and 2 in Mujuga cell legalized their marriages.

Testimonies from champions who accompanied those couples to get legally married tell us that there is an observed change in behavior among men who were convinced and accepted to legalize their marriage status. Not only men, women also feel valued that they are no longer considered as prostitutes. They started to freely and confidently exercise their right of belonging and express their views in their families. 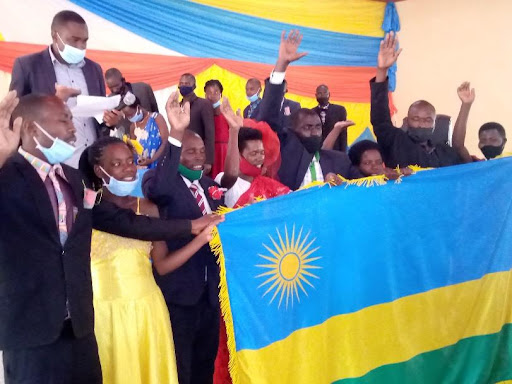 One of those couples is MURAGIJIMANA Martin and UZABAKIRIHO Diane, living in UWINGUGU Cell, UWIMISIGATI Village. In her voice, Diane says : “my husband and I have married 2 years ago. Since then, we did not have any conflict but each one was uncertain of togetherness ! He told me that he has the hidden property he could not reveal to me ! Also, I had unrevealed assets that I could not let him know ! But after getting legally married, my husband and I brought everything to light because we are now legally unified.”

The husband, Martin also adds : “As she said, we are now secured. Before, everyone thought that at a certain time one can leave another and get married to another person, but by getting legally married we confirmed our union. The Law has removed divisionism and tied us together as a husband and wife.”

One of Kitabi Champions said : “We conducted this mobilization just after the training which came as a booster of this engagement. I participated in different trainings but that one has made me and my colleagues awaked and built in us the ability to break the fear ! As we feel as actors of change, we should be champions ! We were all elected for different positions in different structures to be leaders but were not participating meaningfully ! This training has helped us to assess ourselves on our leadership practices, and on how we fulfill our responsibilities. For me, it helped me to nurture my skills in public speaking because I used to fear. Another thing as an added value is that when you have evidence of what you want to say, you do not have fear because you know that none will undermine you”. Said Josephine KABAGANWA.

Champions in Kitabi say that concubinage remains one of the big challenges in their community and this issue leads to illegal marriage that is among the root causes of domestic conflicts and different forms of gender-based violence in their sector. 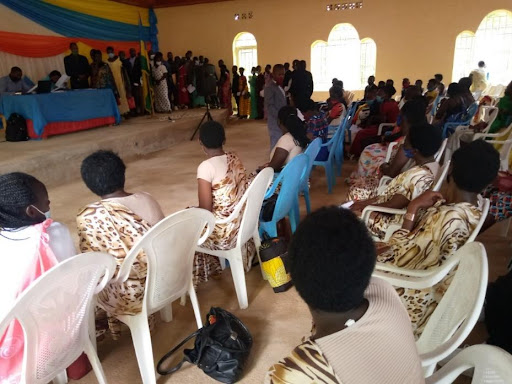 On that occasion, the ES Kitabi sector Mr. Pacifique HAGENIMANA said : “I appreciate the support brought by PFTH in collaboration with CARE International in Rwanda in increasing the strength, skills, capacities, and voice of women and girls for them to become influential and agents of change in their communities. As you may observe, 54 legally married couples are an immediate result of women’s champions’ actions, and this helps us as local authorities to achieve the goal of building safe families under the good governance pillar. I wish that Pro-Femmes/Twese Hamwe and our sector would continue collaborating for more achievements through promoting women’s and girls’ rights and their effective participation in their communities. Married couples will continue to be jointly accompanied by sector authorities and champions to ensure, their commitment/step is sustained for the betterment of their families, and the community at large, and the full support to women and girls champions is fully committed.” Says Pacifique. 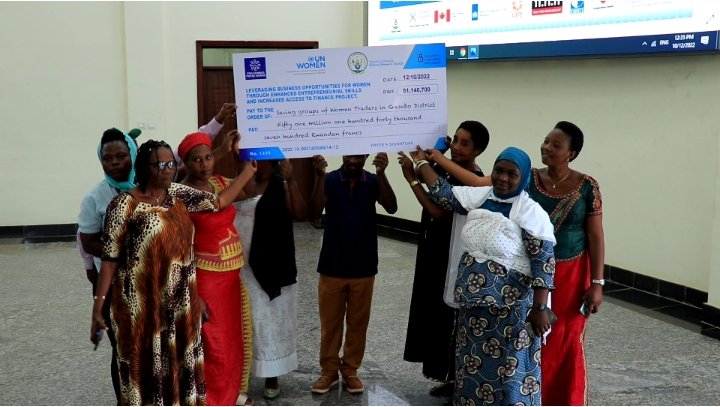 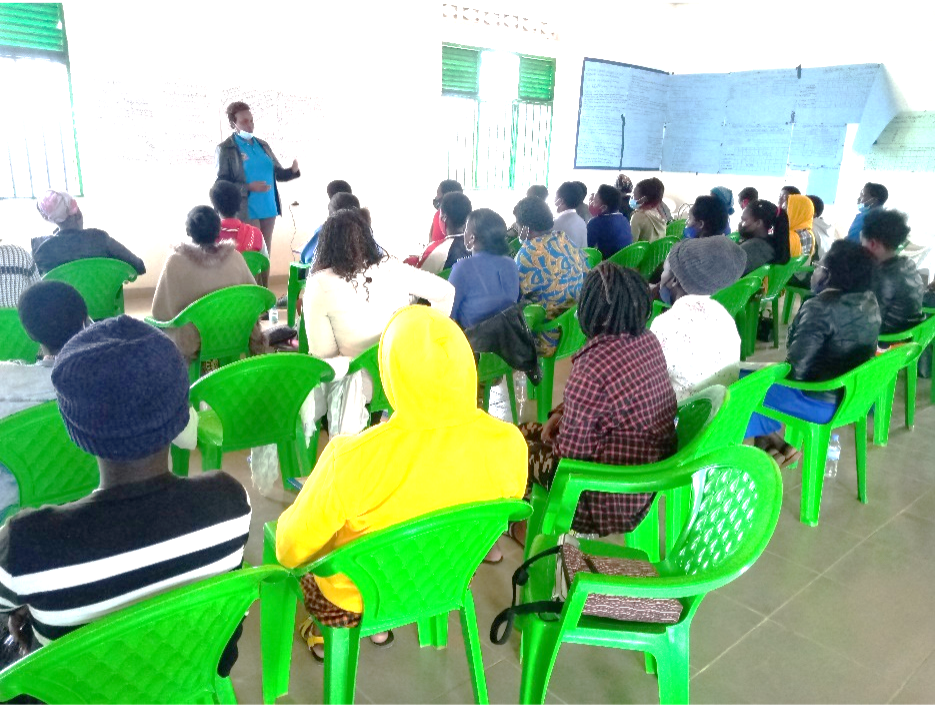 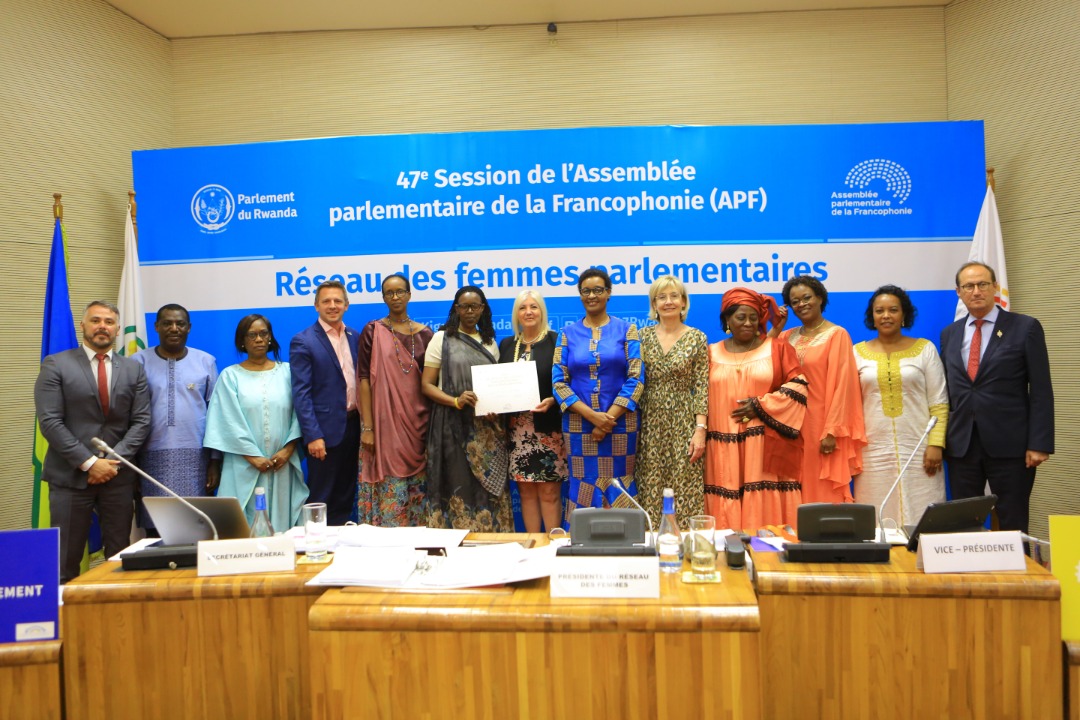